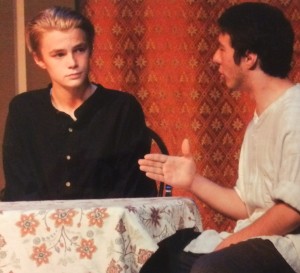 In little more than a decade on the theatre scene in southern California, the drama department at Los Osos High School in Rancho Cucamonga has become one of the top programs in the Southland. Under the direction of Randy Shorts, the school has become a regular contender for CETA honors, even hosting the theatre festival several times.

As Los Osos High School’s first production of 2015-2016 came to a close, the cast and crew were excited about what they had learned, and where the program is going. Jeremiah Hartwig says the camaraderie made this production special.

“This is the most amazing cast I’ve ever worked with,” said Hartwig, who played Rodolpho in the production of Arthur Miller’s A View From The Bridge. “It’s just full of unbelievable actors, all that just lift each other up.” 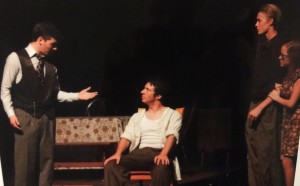 Shorts has seen the program rapidly gain attention in the theatre community, thanks in part to the students’ willingness to take on challenging work.

“My mentor Mike Kramer said ‘students can do more than what people expect,’” said Shorts. “ Sure enough, they really can. They can rise to doing lots of really difficult material.”

Brent Weber was on hand for the final production of View. You can see some clips of the production, go backstage with a few of the actors and more by clicking on the video below to see his story!