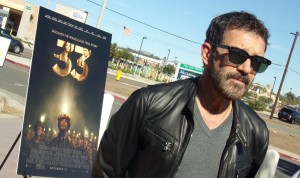 The 33 is based on the true story of the 33 miners who got trapped in a Chilean gold mine for two months when it collapsed back in 2010.

“The story itself is very powerful,” Banderas told California Life. “If someone in Hollywood were to write this, it would be incredible.”

Banderas also opened up about the extreme conditions he and the rest of the cast and crew faced while filming. “We were just working in real mines,” Banderas said. “We were breathing methane gas everyday. It was really cold, really dry.” 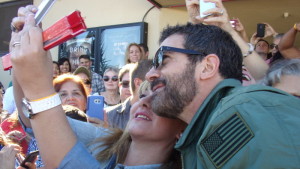 During his visit, fans got a chance to snap selfies with Banderas and get his autograph.

Margo Porter was the first one in line at 7:30am. “He’s fantastic and very handsome,” Porter told California Life.

For much more on Banderas’ visit, be sure to check out our story below, airing statewide this week on California Life!