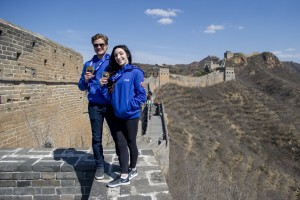 Ice dancers Meryl Davis and Charlie White haven’t slowed down since Feb. 17, 2014. That’s the day they won the gold medal at the Sochi Olympics, becoming the first Americans in the sport to do so.

In the more than two years since, they’ve competed on Dancing With the Stars (Davis won) and performed on tour in rinks across the nation.

Recently, they even traveled to China with Visa to kick off the 2016 U.S.-China Tourism Year. There, they welcomed nearly 1,000 U.S. tourists to The Great Wall.

They also took time out to answer the question everyone wants to know ~ whether they’re considering going for the gold again in 2018.

Hear what they have to say in the video below, airing statewide this week on California Life.