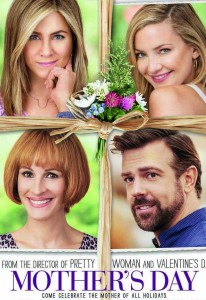 When I heard that there was a movie coming out called “Mother’s Day,” I thought, well this is going to be “Valentine’s Day” all over again. Garry Marshall directed both movies. However, there are some noticeable differences.
There are several storylines going on at once in “Mother’s Day.” One couple is splitting up while another is thinking about getting married. Basically, it’s about all of these couples re-connecting with their mothers. They even made use of Skype online video chat, which I thought was very clever.
“Mother’s Day” opens with a shot of a mother and her son getting ready for school. The bus pulls up in front of the house and the boy runs to get on before it takes off. Then, mom throws a banana at the bus hoping her son would catch it, but it falls on the ground. Next, we hear another boy shouting, “Mom…Mom…Mom.” That’s when we see Jennifer Aniston, who plays Sandy, a divorced mother.

Sandy’s ex-husband announces that he has remarried to a much younger woman named Tina. The only problem is they have two boys–so there is a constant battle over custody.
“It’s beautifully written and each of the characters are interconnected the way Garry Marshall does films,” actress Gianna Simone said in an exclusive phone interview. “There’s nine mothers and I play a pregnant mom, the mom-to-be. We’re all interconnected in our own ways. I work at a restaurant with Britt Robertson, who plays Julia Roberts’ estranged daughter. Each character brings you to a different mom’s story.”
Julia Roberts plays a Home Shopping Network host 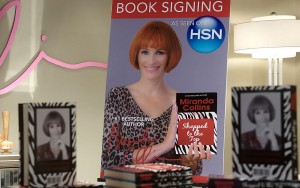 name Miranda. She gave up her only child at birth, Kristin (played by Britt Robertson). Kristin has been dating a comedian named Zack for five years and they even have a baby. Zack wonders how much longer it will be before Kristin will tie the knot and get married.
Meanwhile, Jesse (Kate Hudson) is married to Indian-American doctor Russell (Aasif Mandvi from “The Internship“). Her parents show up a few days early with their RV. They were surprised to find out that not only is their daughter married, but that she has a little boy.
Scenes for the film were shot in Atlanta, Georgia. It is rated PG-13 for language and some suggestive material. “Mother’s Day” is one hour and 58 minutes long. Garry Marshall directed the movie.
I really enjoyed this movie. There was a lot to laugh about. When you have a huge cast with names like Jennifer Aniston, Julia Roberts, Kate Hudson and Jason Sudeikis, how can you go wrong? It also featured cameo appearances by Jon Lovitz and Hector Elizondo from TV’s “Last Man Standing.” I would encourage everyone to walk, not run, to see “Mother’s Day.”
I wonder how long it will be before we get a film called “Father’s Day.” I bet it’s already in the planning stages…
OVERALL GRADE: B+
Tweet