The right pair of shoes are for more than just walking, they give you the confidence to strut your stuff! 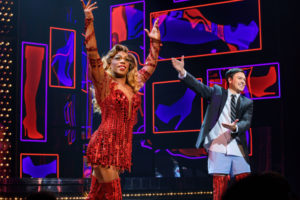 Our Audra Stafford took us behind-the-scenes of the new Broadway musical Kinky Boots that proves the right pair of shoes can also bring people together.

The hit show follows a factory owner struggling to save his family business, as he meets a drag queen with an outrageous personality!

The two comically come together to make a wild line of boots that get people talking.

However, Darius Harper, says while the show provides lots of laughs, it also dives into deeper issues.

The Kinky Boots Angel adds some of the issues were especially personal for him.

“It’s very special.” He says, “I think the message of the show is important right now. Also the themes hit close to home with me. There’s a lot of father-son themes.

Kinky Boots is the winner of every major Best Musical award including The Tony, The Grammy and London’s Olivier Award.

For more on the play, visit the Kinky Boot’s website.

Click below to see Audra’s full interview. Or watch this week’s episode of California Life with Heather Dawson airing nationwide!