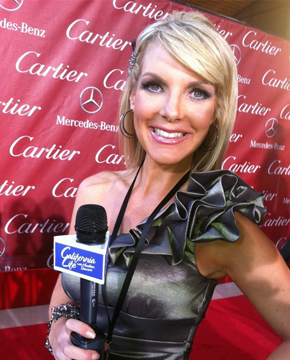 Heather Dawson created the news magazine show Southern California Life as a way of providing positive news to the Southland. After several years of success, Heather expanded the newsmagazine show to the entire state of California. California Life with Heather Dawson is now airing Nationwide on over 200 stations in 50 million households. Prior to California Life, Heather became one of the youngest News Directors in the business working as a Multi-Media Reporter/Anchor at KHIZ. Heather then went on to Anchor the #1 rated newscast on NBC in Palm Springs as well as UPN in San Diego and KVMD in Los Angeles. Heather was the International Model Search Winner and Cover Model for American Swimwear Magazine. She was also featured on Baywatch, Bold & The Beautiful, Renegade.

Audra Stafford is an Emmy Award winning Reporter for CW in San Diego and BroadwayWorld.com, Audra has covered such star-studded events as the Academy Awards, Daytime Emmy Awards and Dancing With the Stars. She was also one of only two journalists in the nation to be embedded in a production of CATS during its national tour.

Ava is a Model, Singer and Style Reporter for California Life. Ava produces a Best of Style segment as well as manages the show’s social media channels on Pinterest. Ava’s award winning talent show post holds the record for the most streamed video on the channel! Ava also Hosts CCTV and is a competitive dancer for CCDT.
Contact: ava@californialifehd.com

Brent Weber has worked as an award-winning network reporter and anchor for CNN, produced and hosted television series’ such as Action Figures TV, published the book The Sports Guy: Scorecard Scribblings From An Ordinary Journalist and produced the acclaimed documentary Real Live Angels, which earned Honorable Mention laurels from the Santa Monica Independent Film Festival in.

Concetta DeLuco is a seasoned Reporter who honed her skills working at CBS & NBC affiliates in Tampa as well as an actress in Los Angeles, online editor for the Cooking Channel food blog, and Entertainment Tonight, and an amateur chef working on her own food & lifestyle blog.

David Wylie is an award winning news reporter and news director who has been covering Southern California on both radio and television for more than 20 years. Born and raised in the Pasadena area, David is a life long resident of the Southland.

Georgette has experienced the best of both worlds in the anchor chair and out in the field at CBS in Palm Springs and FOX News Sacramento. Georgette is empowered to dedicate her voice to sick kids and the elderly at various hospitals across the country. Her voice can also be heard on many TV & radio commercials. Georgette is a proud member of the Asian American Journalists Association AAJA.

Jeremiah is an Actor, On-Field Host @rcquakes and Lifestyle Reporter for California Life. Jeremiah is an adrenaline enthusiast whose love of travel helps in his mission work for the charity LoveLikeDawson. Jeremiah’s credits include Pitch Perfect 3, A View From The Bridge, Black Comedy, WHERE THE WILD THINGS ARE and CAMELOT contact: Jeremiah@californialifehd.com

J.R. has been able to weld together his love of anything that has wheels and his broadcast career for motorsports programming on outlets such as Speed TV, The Outdoor Channel and Fox Sports Net. J.R. has also spent time as a news reporter and anchor for Silver King Broadcasting and as a radio announcer for various stations in the So Cal region.

Kaori has been featured on various digital and internet shows including her own “geek” Youtube channel which features vlogs, gaming, and wrestling content. She is also a cosplayer and you may catch her at your next convention dressed up as one of your favorite comic book characters!

Madison is a travel enthusiast, fashion guru – avid blogger with 200K Followers and actress appearing on the popular YouTube shows Teens React, Adults React, and the React Channel created by Fine Brothers Entertainment.
A Native Californian, Madison’s passionate about all things lifestyle and relays those interests by writing and reporting for California Life!

Marco Gutierrez is a Digital Media educator with over 10 years of media experience that include video production, web design, digital marketing and more. He is a natural teacher, and eager to spread knowledge. He is a native Spanish speaker and avid trekker of Mexican destinations like Mexico City, Oaxaca, Puebla, Guanajuato, Querétaro producer of the Puerto Vallarta series “Travelerios”.

Michael Serrano is a videographer/photographer with a focus on online content. With a passion for storytelling, Michael creates invoking media for brands. He began his journey as a graphic designer freelancing in the industry. Michael is now a segment producer at California Life HD with Heather Dawson.

Noelle is a travel enthusiast specializing in mission work for the charity LoveLikeDawson. A talented public speaker and actress, her background in Theatre include Canterville Ghost, 13 Past Midnight & The Barretts of Wimple Street. Noelle specializes in utilizing social media platforms to expand the show’s content and engage its growing fanbase.

In Memory of Tom Sparks

In memory of Tom R. Sparks (1976-2009), his family and friends have set up a scholarship fund at USC’s Annenberg School of Communication to help graduate students in Broadcast Journalism achieve their dreams. The scholarship will be awarded to students who share in Tom’s love of life, show a commitment to the field that Tom held so dear, and who display a touch of Tom’s eclectic personality. We hope that through this scholarship, Tom’s legacy at USC will live on for generations to come.